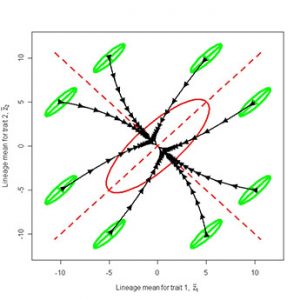 Previous versions of this 5-day workshop were given at National Evolutionary Synthesis Center (NESCent) at Duke University in Durham, North Carolina from 2011-2013, at the National Institute for Mathematical and Biological Synthesis (NIMBioS) at the University of Tennessee in Knoxville from 2014-2016, and at the Friday Harbor Laboratories in 2017.

Quantitative genetic theory for natural populations was developed considerably in the period from 1970 to 1990 and up to the present, and it has been applied to a wide range of phenomena including the evolution of differences between the sexes, sexual preferences, life history traits, plasticity of traits, as well as the evolution of body size and other morphological measurements.

Phylogenetic approaches to comparative biology were developed in the 1980s and 1990s, including inferring how traits covary in evolution and how optimum values of traits vary between species. Textbooks have not kept pace with these developments, and currently few universities offer courses on these subjects aimed at evolutionary biologists.

Evolutionary biologists need to understand this field because of the ability to collect large amounts of data by computer, the development of statistical methods for changes of traits on evolutionary trees and for changes in a single species through time, and the realization that quantitative characters will not soon be fully explained by genomics. This workshop aims to fill this need by reviewing basic aspects of theory and illustrating how that theory can be tested with data, both from single species and with multiple-species phylogenies. Participants will use R, an open-source statistical programming language, to build and test evolutionary models.

The workshop involves lectures, discussion, and in-class computer exercises. The intended participants for this workshop are graduate students, post-docs, and junior faculty members in evolutionary biology. The workshop can accommodate up to 30 participants.

Cost: $1000, to be paid to Friday Harbor Laboratories.
This fee will cover housing and meals at FHL and all
other workshop expenses, except travel.

The two scientific societies have generously agreed to provide a
$200 compensation to participants.  This will be paid after the
workshop, to participants who have completed the workshop.  A
condition of receiving the compensation is that the participant have
joined that society by that time.  Each society will compensate 13 of
the participants, for a total of 26.  The capacity of the workshop is
30 people, so this should cover almost everyone (priority will be
given to those registering earliest).

This workshop is co-sponsored by The American Society of Naturalists and the Society for the Study of Evolution.

For more information see the BLOG for the workshop. The information on schedule, lecture and exercise contents, deadlines, and cost will, of course, change somewhat for the 2018 workshop.

Instructors for this course are: